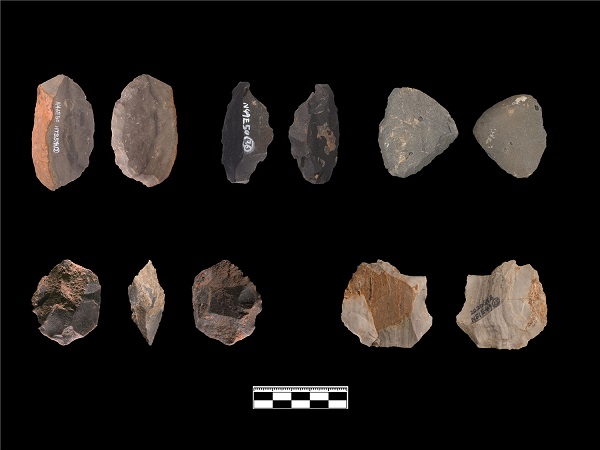 A set of chipped stone tools excavated from the site. [Photo provided to China Daily]

According to a team of researchers from Southern University of Science and Technology based in Shenzhen who participated in Zhang's project, human activities were quietly recorded by the growing stalagmites in the cave as burned ash has been detected in the geological deposits of calcium carbonate, echoing a time when fires were frequently lit in the cave.

"Further studies of the information hidden in the stalagmites may unveil more types of human activity," says Zhang, who is confident that more findings will present themselves.

But their existence was not just about staving off the darkness and the fear of animal attacks. Beyond the cold nights was the continuous pursuit of a comfortable life and a place to call home.

In 2016, Zhang led his team on a comprehensive survey of the caves in Guizhou. He first learned of the existence of Zhaoguodong, the name of which literally means "a cave attracting fruits", through a conversation with local villagers.

Surrounded by trees and situated close to a river, the cave, with its ideal living conditions, immediately hooked Zhang's interest. Guessing that it had probably once been home to an ancient human settlement at some point, Zhang began investigating the cave, which proved his instincts right.

Zhang notes that, much like people today, who consider many things about a location when buying a property－such as how close the nearest grocery shops are and how safe the neighborhood is, people from 40,000-odd years ago also had similar concerns, choosing this place, not only because the natural landscape made for a perfect shelter, but also because the river in front of the cave was a consistent source of water and food.