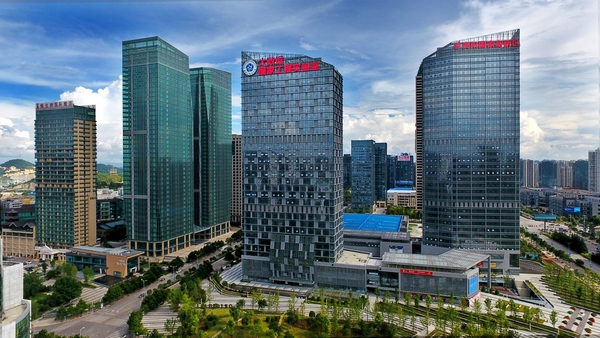 Guiyang and Guian New Area in Southwest China's Guizhou province were approved to co-establish a national big data industry development cluster in 2015. After five years of development, big data has become one of Guizhou's pillar industries and the cluster has become known as the "Data Valley of China."

With the support of government policies, Guiyang and Guian have taken full advantage of the big data industry and aim to become an economic highland in West China.

In 2020, Guizhou's government announced the start of the integrated development of Guiyang and Guian. Currently, the traffic network between the two areas is under construction.

Once constructed and opened to traffic, the commuting time between Guiyang and Guian will be less than 30 minutes, boosting the circulation of resources, people, logistics and information between the two areas.

The high-speed railway network centered on Guiyang and Guian has been completed. People can now travel to Chongqing, Chengdu, Kunming, Nanning, Guilin, Guangzhou and Changsha in three hours.

Guiyang and Guian are also connected to the China-Europe train routes and the New International Land-Sea Trade Corridor, providing access to rivers, oceans and other countries and regions.

Since the implementation of the integrated development plan, Guiyang and Guian have attracted major projects such as the People's Bank of China's data center and Hengli Group's industrial park, among others.

Guizhou has shown its policy and infrastructure advantages and used them to attract professional talents and global big data giants. By boosting the real economy, Guiyang and Guian will build big data industrial clusters to become a major economic entity in West China.

As the core area of the national big data comprehensive pilot zone, Guiyang has attracted big data giants such as Huawei, Tencent, Intel and Dell. In 2020, Guiyang's added value of the digital economy was 164.9 billion yuan, increasing 10.8 percent year-on-year.

By 2025, Guiyang and Guian aim to achieve foreign trade worth $12 billion yuan and have the digital economy's added value occupying more than 45 percent of GDP.