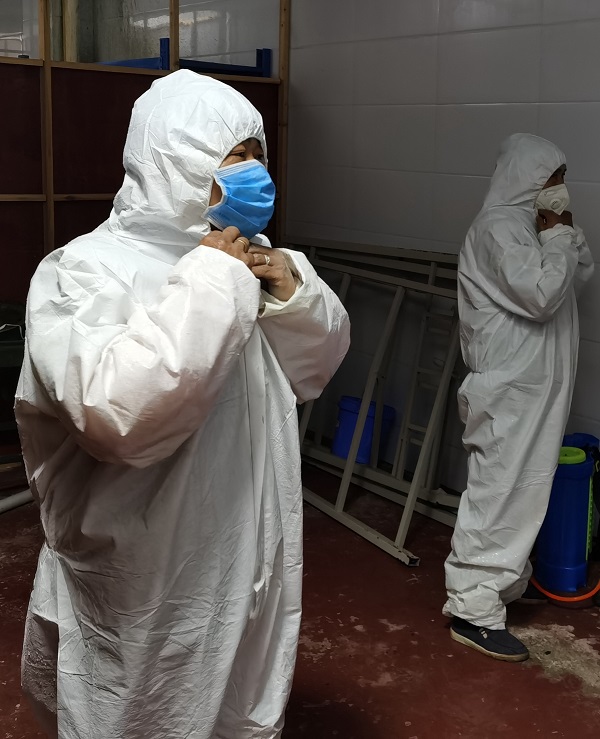 Li Xianjun (left) is seen in this photo.

Editor's note: This series tells the stories of selfless individuals, from medical workers to volunteers, who are bravely fighting the virus outbreak with extraordinary dedication.

Li Xianjun and his two colleagues, who were earlier in charge of collecting and transporting household waste in Guiyang, capital of Southwest China's Guizhou province, had another task to perform after COVID-19 outbreak: safe disposal of discarded face masks.

As part of the city's efforts to curb the spread of novel coronavirus, Li and his colleagues, Li Zhongyu and Li Benhua, collect discarded masks and disinfect trash bins across the city－a task they have been engaged in since Jan 28.

Every day, the three－donning protective clothing, and wearing masks and gloves－work for about 10 hours, driving the sanitation truck to clear 48 trash bins at 30 locations across the city.

"The volume of garbage we collect is less, but the route is longer, and we need to protect ourselves from being infected. It is a little stressful," said Li, a sanitation worker with Shuanglong, a subsidiary of Guiyang Jingxi, a city service company.

After the outbreak, the company formed a special working group to ensure the disposal of discarded masks in a safe manner every day.

It takes about 10 minutes to clear each trash bin.

As they approach the trash bin, they stop the truck, strap on the disinfectant spraying equipment on their backs, and spray the bin. They open the lid and spray again.

Li uses tongs with long handles to pick up masks from the ground and puts them into the trash bin.

He clears the bin, replaces the trash bag containing masks with a new one, and sprays the bin with disinfectant.

After that, the team puts the bag containing discarded masks into a new garbage bag, ties it up, sprays disinfectant and dumps it into the truck.

He said the team used to find masks discarded carelessly in the beginning. "Maybe most of the people were unaware of the seriousness of the situation at that time."

As the days went by, the team collected more and more masks. Then, the numbers dropped.

"That could be because of the measures taken by villages and communities. As people don't go out so often, they use fewer masks."

Li and his colleagues go back to their office for lunch and step out again.

At around 5 pm, they take all the 48 bags containing masks to a designated hospital for safe disposal.

With the day's task completed, Li is relieved. The trio chat and laugh while driving the truck back to the office.

There, they wash and disinfect the truck, and go to their homes.

Long hours of work has made him physically and mentally tired.

After getting home, Li takes off his coat, washes his hands and lies on the sofa.

"My family gets worried about me. But somebody has to do the work," he said.

"I hope the epidemic ends soon, and people need not have to wear masks," he said.

According to Xu Fang, head of the company, Li and his colleagues volunteered to perform the task of collecting and disposing of masks when the special team was formed.

"They are always willing to do hard work. We all admire them," Xu said.

The company has designated five other workers for the job. Now the two groups work in shifts.

Like Li and his colleagues, there are many such workers engaged in this work across the country.

They collect special garbage, such as masks, and carry out disinfection procedures while cleaning the streets, in a bid to halt the spread of the virus.

Wang Jin and Guizhou Daily contributed to this story.