Construction began on Terminal 3 of the Guiyang Longdongbao International Airport, and the third phase of expansion work was in smooth progress.

Efforts toward improvement of living environment accelerated. About 9.6008 million square meters of shanty town area were upgraded, benefitting around 211,500 people; 158 old residential compounds were upgraded; and 200 kilometers of side streets and alleys were renovated. A total of 30 rural complexes were built and 30 rural villages were announced "rural villages of abundance and beauty".

Urban-rural integration progressed at a faster rate. The proportion of permanent urban residents was 75.4 percent. A total of 118 kilometers of water supply lines were either built or redone. Reliability for power supply in rural areas reached 99.9 percent. About 99.4 percent of administrative villages had access to postal service, and all rural towns and villages had access to express delivery service. 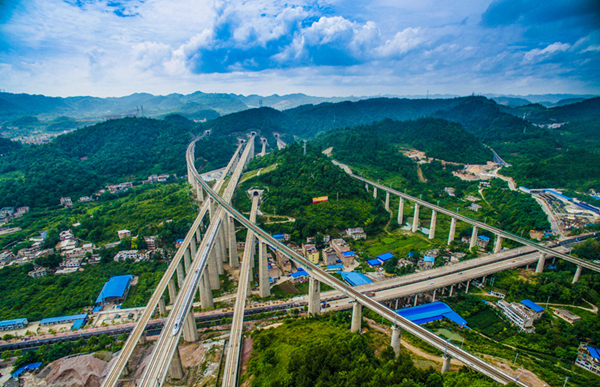 A view of the expressways in Guiyang. [Photo provided to chinadaily.com.cn]