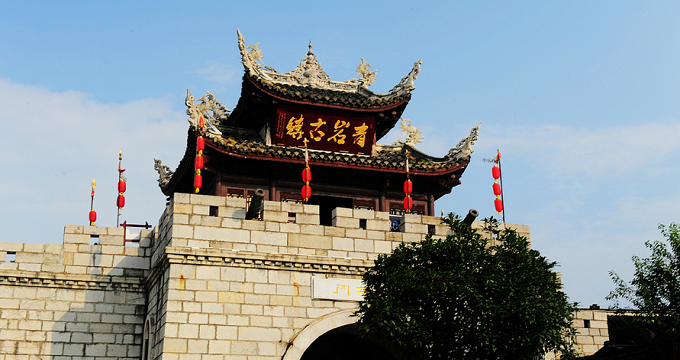 Qingyan Ancient Town, one of the most famous historical and cultural towns in Guizhou province, lies in the southern suburb of Guiyang.

The ancient town was originally built in 1378 and used as a military fort. Through years of modification and repeated restoration, Qingyan Ancient Town has gradually become a renowned ancient town with cultural features of the Ming and Qing Dynasties (1644-1911), attracting numerous domestic and foreign tourists every year.

In 2010 and 2013, the town was honored as "one of the most charming towns in China" and the "hometown of Chinese poetry". It was listed among the national 5A scenic areas in February 2017.

Although small in size, Qingyan Ancient Town has a well-planned architectural style filled with hundreds of relic sites and a prominent local culture.

Due to the local geology, Qingyan Ancient Town was built completely out of stone. Visitors can see spectacular city walls infused right into the vast cliffs, which divided Qingyan into inner and outer towns. There are four gates in the wall, facing north, south, east and west. Outside the four gates, there were originally eight stone tablets, which were considered the symbols of Qingyan Ancient Town. Of the eight, three remain with delicate sculptures on each surface.

Walking inside the inner town, visitors will surely marvel at the ancient architecture here. There are over 30 types including monasteries, temples, cabinets, caves, courtyards and palaces. All of them were delicately designed by the skillful architects of the Ming and Qing Dynasties.

Qingyan Ancient Town really is a fantastic place for visitors to learn about Chinese ancient culture. It should be advised not to rush through the wonder of the historical city. It is worthwhile to stay in the town for one or two days, as to get a full grasp of the classical elegance of this unique ancient town.