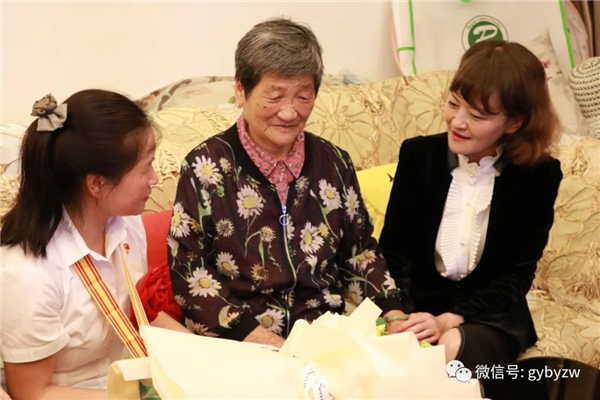 Bu Lan (R), Party secretary of Baiyun district, pays a visit to Liu Fang on behalf of the CPC Baiyun committee and the Baiyun district government on July 2. [Photo/WeChat account of gybyzw]

Party member Liu Fang from Baiyun district in Guiyang, capital of Southwest China's Guizhou province, was granted the honorable title of "National Outstanding Communist Party Member" in a grand ceremony held at the Great Hall of the People in Beijing on June 28.

Liu Fang is a blind teacher of the No 3 Middle School in Baiyun district.

Liu has always been loyal to the Party's educational causes. In her 28 years of teaching, she has served as a Chinese teacher and a psychological counselor for students, teaching a total of more than 1,400 students.

She has also presided over the completion of a number of provincial and municipal projects, such as the "Survey on the Status of Left-behind Children in Rural Areas".

Liu has carried out psychological counseling work at the Guizhou Industrial Machinery School, on the Guizhou Comprehensive Radio Station FM94.6 frequency, in Dashandong sub-district, and other places, helping more than 16,000 people.

Liu has also used income from her literary creations and lectures to set up the "Liu Fang Education Fund" to help students with physical and social disabilities.

On July 2, a delegation led by Bu Lan, Party secretary, paid a visit to Liu's home and congratulated her on behalf of the district's Party committee and government.