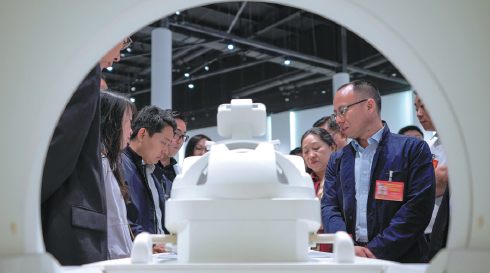 Visitors check out medical equipment during an exhibition in Guiyang, Guizhou province. HE JUNYI/CHINA NEWS SERVICE

More efforts are expected to speed up big data development and seize new opportunities in the digital economy in Guiyang and the Guian New Area in Guizhou province, an official said on Wednesday during the two sessions.

Guiyang Mayor Chen Yan, who is also the director of the administrative committee of Guian New Area and a deputy to the 13th National People's Congress, said big data and related industrial clusters have been important drivers of technological development and economic growth for both Guiyang and the area. The regions will continue with their strategic efforts to promote and develop big data-centered industrial clusters for further growth. 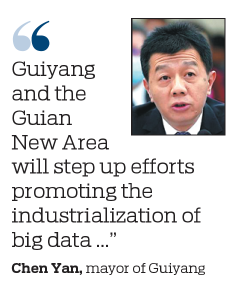 "In terms of promoting the digitalization of industries, Guizhou and Guiyang will facilitate the integration of big data with the real economy and accelerate the digital transformation of industries. The goal is to better leverage big data strengths in the region to generate more growth points in areas of industrial manufacturing, modern logistics and the production and sale of agricultural products," Chen said.

As core areas of the national (Guizhou) big data comprehensive trial zone, Guiyang and the Guian New Area have made achievements in big data development. From 2016 to 2020, Guiyang incubated 117 big data companies whose annual revenue from core business exceeded 20 million yuan each, and added value of digital economy was estimated to have surpassed 160 billion yuan, accounting for over 38 percent of regional GDP. In the past five years, over 85 percent of Guiyang-based companies have migrated to cloud services.

As the big data industry is developing rapidly in Guiyang and the Guian New Area, local governments are fully aware of the importance of data security and have made explorations in the sector. The regions have established a data security network and constructed China's first big data engineering lab, the mayor added.

Zhao Yandi in Guiyang contributed to this story.