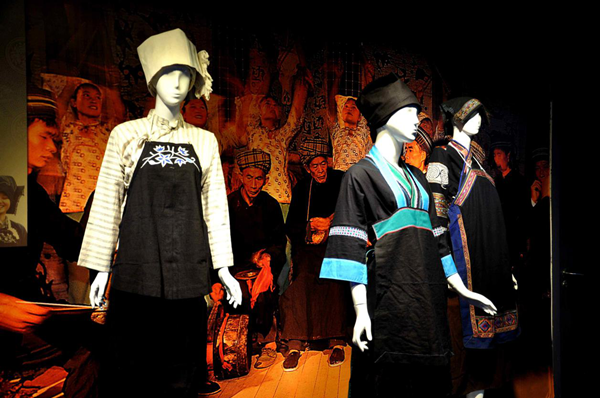 Almost all women of the Buyi ethnic group are expert in weaving and embroidery. Under the guidance of her mother, a Buyi girl can almost immediately become a master of cotton (linen), yarn spinning, weaving, dyeing and sewing. Exquisite Buyi embroidery includes skirts, cuffs, lace, embroidered shoes, bed curtains, pillowcases, waists, and bracelets, given as precious gifts or symbols of beauty. Women especially cherish embroidering flowers on the back of cloth straps used for carrying children, because the embroidery of flowers in that location requires special attention to the symmetry and neatness of stitches and patterns. Under the guidance of skilled embroidery experts, a flower on the back of a dress can only be completed after repeated practice, and often expresses the maker's good wishes and sincere feelings when she is in love. In addition, some capable grandmothers, when their first grandson is fully one-month old, customarily send such embroidered straps to celebrate his birth and bless his healthy growth. 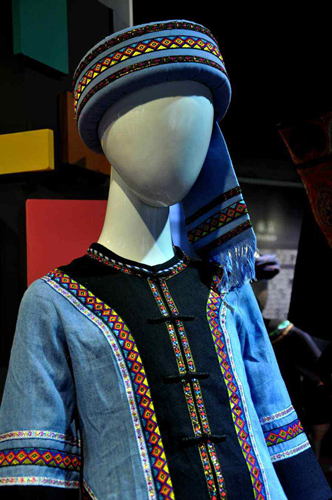 In bygone days most of the older generation wore blue and black garnet dresses, and some wore blue cloth waists or embroidered aprons, and a pair of exquisitely embroidered shoes with a crooked nose, commonly known as "cat-nose embroidered shoes" ("Hailangao" in the Buyi language). A complete set of clothing can be said to require a combination of textile, dyeing, embroidery and other handicrafts as well. It is precisely because of the dexterity and skillfulness of Buyi women's hands that the collection and sewing of this attire is often considered as a measure of a Buyi woman's intelligence and ability. With the development of the times the turbans for middle-aged women have been partly replaced with white towels, and traditional jackets have been replaced by high or low-collared ones inlaid with two or three colored cloth edges along their right lower front. People prefer to use silver bubble buttons for decoration for knots in front of the collar, but the traditional style of the older generation for cuffs has remained. Today people prefer wearing long pants for the lower part of the body, and the embroideries on the shoes have gradually changed into a half-moon shape, or embroidered small flowers on the toes. The new-styled Buyi women's dress still looks clean and elegant, simple and dignified. For unmarried young women, in addition to the general similarity with middle-aged women, they also like to embroider at the end of their turban cloths in very bright patterns, freely exposed on the top of their heads between silver hairpins. Everything appears free and easy, and pleasing to the eyes. On grand festive occasions and banquets, women wear all kinds of earrings, rings, necklaces, hairpins, bracelets and other silver ornaments. Buyi women in ethnically-mixed neighborhoods are particularly fastidious about wearing a 15-foot-long turban. They still generally choose blue, cyan, black and white right-hand traditional jackets with buttons on one side of the front, and a few also wear waistbands with long pants.